News Blog History of Bingo and what is bingo

History of Bingo and what is bingo

The sounds of shuffling numbered balls and daubers being pressed against paper fills the room of bingo halls. This game has been popular and widespread for quite some time now, but what exactly is it? Bingo is a gambling game based completely on chance. Players buy cards with random numbers placed across them and chips or “daubers” (sort of a mix between a marker and a stamp) to mark out the numbers that have been called. A person known as the “caller” shuffles numbered and lettered balls in a large machine and pulls them out randomly, one at a time. The caller will call out the number and letter associated with the ball and the player will mark it off of their cards if they have that specific number. There are a variety of ways to play this game, and most bingo halls offer different game variations in each session. However, the most traditional way to win this game of chance is to be able to mark out five numbers in a row, and then yell “Bingo!” to collect the winnings.

Where it All Began?

This classic and popular game did not appear in the modern day version when it was created. It is known that Bingo is a game that has grown out of the traditional gambling in lotteries within Italy in the early 16th century. The game spread across Europe fairly easily, and quickly became popular in Germany as a way to educate children. However, instead of betting money, Germans used beans and pure enjoyment to play the game. Because beans were used, the game was then given the name “Beano”. The game travelled with German immigrants to America where the game and its popularity continue to spread.
In the early 1920’s, Hugh J. Ward was credited for the creation of the modern game, the name of which had morphed to Bingo over the years. He also went on to write a book of rules for the game and its players. The game continued to grow and change throughout the decades. Many rule variations can be made to change up the game a little bit. Bingo today is popular to play at home with friends, at Bingo Halls across the world, and of course at casinos.

The rules of Bingo are fairly simple. A player purchases their cards filled with random numbers, the caller calls the random numbers and letters that have been drawn, and the player marks the numbers that they have on their sheets until they can obtain five in a row. The name Bingo corresponds to the actual gameplay. On the playing cards numbers are listed below each one of the five letters. Below ‘B’ players will typically find numbers 1-15, below ‘I’ will be numbers 16-30, below ‘N’ will be numbers 31-45, below ‘G’ will be numbers 46-60, and below ‘O’ will be numbers 61-75. Many casinos and other gambling organizations change this standard form up however, to accommodate for more people and game variations.
There are quite a few other ways to play the game of Bingo, besides just allowing the winner to collect five numbers in a row. Another variation of the game is the “picture frame”, in which the players must be able to mark out the outside square of the game board (all of the B’s, all of the O’s, and the top and bottom numbers of I, N, and G). Another extremely popular way to play is known as “blackout” in which the player must be able to mark off every single number on their card before they can win. The variations continue, as each Bingo session usually offers around ten to twelve game variations to play. CasinoWebScripts has developed a multiplayer bingo solution that lets players try their chance every 5 minutes. 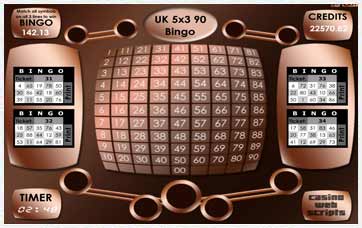 Bingo is an extremely popular game across the world because it can serve for so many purposes. For example, in Germany they use it to teach children how to read but in Italy it is more of a lottery gambling game. Bingo is also popular because it is an easy game to learn and to win, and a great way to be able to enjoy one’s self while socializing with other players.
In the United States Bingo can be found across the country in a variety of locations. Many people purchase the game to play at home for fun with friends and family. It is also very common for companies and non-profit organizations to host a game of Bingo at a bingo hall to make money. The game is also commonly found in large casinos in places such as Las Vegas and Atlantic City.
Another location where bingo is extremely popular is in the UK. There are more bingo halls found here than in America. Also, although players in the UK typically follow the same rules as the players in the U.S., bingo is played in the UK with 90 balls (and 90 numbers available on the cards) instead of 75. The number of players clearly speaks for itself; bingo is one of the most popular games in the UK. In fact, over three million people play bingo weekly in the UK alone! (3).
A third place that has seen an extreme jump in bingo players is Japan. Here, players often play both the American 75 ball version and the British 90 ball version of the game. Although the gambling laws in Asia are beginning to become very strict, bingo still rises in popularity. People play at bingo halls where alcohol is served, and it is also extremely common for people to play bingo in an online casino.
Many other countries across the globe have seen an extreme rise in bingo popularity over the past couple of decades. Many politicians and historians attribute this to the global recession. Many people are low on money, but they also love to gamble. Bingo offers a way for players to gamble for cheap, enjoy themselves, and possibly win a large amount of money.

Bingo has come a long way since it originated from Italian lotteries in the 16th century. It has modernized, grown in popularity, and grown in number of game variations. The game has spread across the world quickly during the most recent recession and can now be seen as one of the cheapest and fun ways to gamble and win money with friends. This game will continue to be popular throughout the future because of these reasons, and more opportunities and locations to play it will arise.

*Enter sum of: 2+5
*I consent to having this website store my submitted information for the purpose of contacting me back with an answer to my enquiry. Type YES in the box below.
Subscribe to newsletter? Type YES in the box below to subscribe or leave empty to avoid subscribing.
What were you searching for, when you found us? Keyword(search engine phrase):