The game of roulette is popular all around the world, thanks to the fact that its rules are not difficult to understand and it is really fun to play. Since the 18 th century, the game developed for the first time in France has gained popularity among players who enjoy gambling games. Roulette is seen as a luxurious game in land-based casinos, especially created for those who prefer a classy, royal-like gaming experience.

Roulette has also become extremely popular on the internet, since casino software developers now provide a multitude of roulette variants, which are demanded in different parts around the world.

If you are looking to start an online casino with roulette games, you might want to know about the types of roulette that you can purchase, and choose the right ones depending on the customers you want to reach.

Since the roulette game has been invented in France, we can say that the European roulette is the original version of this game, and also the most authentic. On the European roulette, we can find a set of 37 numbers. Number pockets from 1 to 36 alternate between black and red, while the 0 number is colored in green.

These numbers are placed on the wheel in an order which seems to be random at first, but they are actually aligned in a mathematical order which offers equal chances for winning on every number.

The casino software developers from CasinoWebScripts have designed several versions of the European roulette, for both single player and multiplayer mode. 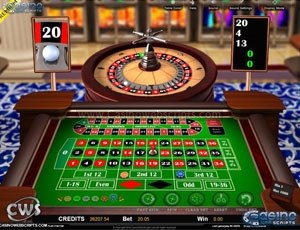 The European Roulette 3D game has been designed to reflect the classic, refined look of traditional roulettes that we can find in land-based casinos all around the world.

The colors of the table can be changed depending on the players’ preferences, and the sound effects offer a relaxing experience.

When the roulette ball falls in a certain pocket, a popup appears so that the players can easily see if they won or not. The 3D online version of European Roulette has a realistic look and can be played on desktop devices.

The multiplayer version of European Roulette 3D has been designed by the casino software developers from CasinoWebScripts to bring together gaming enthusiasts from all around the world. During this game, players place their bets and every 1 minute, the roulette spins. Players who have guessed the lucky number or combinations will be the winners. This version of the game has also been designed with a classic look, with dark brown wood elements and a casino-style background. 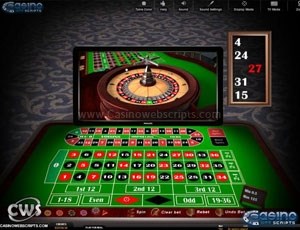 The European Roulette TV 3D is another variant of the roulette that our casino software developers have designed. During this game, the roulette is displayed on a flat TV screen which appears after bets are placed.

During the game, on the left side of the screen, players can see a popup with the winning number, and on the right side, the winning bets. The European Roulette TV 3D can be a nice addition to your online casino, thanks to the original design.

Our casino software developers have also created a multiplayer version of this game, which will offer players the chance to compete against other gaming enthusiasts while playing at your online casino.

The American version of the roulette game is a little bit different from the European variant, due to the fact that it has an additional number pocket with two zeros. This means that the American roulette has 38 number pockets, numbers from 1 to 36 colored in black and red, and the 0 and 00 pockets colored in green.

The fact that there is an additional pocket, the one with the two zeros, offers the house a greater advantage than the European version of roulette. The numbers are arranged in a specific order, opposite to one another. 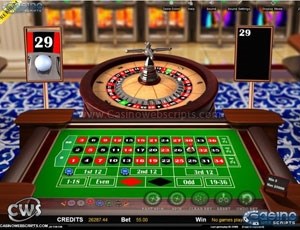 The American Roulette 3D game created by the casino software developers from CasinoWebScripts has been designed with the same classic look as the European Roulette 3D, similar to a table from a luxurious land-based casino.

Players can make all sorts of modifications during the game, such as the color of the table and the background sounds. The fact that the American roulette contains one more pocket, the “00”, offers players more chances at winning. This is why a lot of gaming enthusiasts prefer to play this roulette variant.

There is also a multiplayer version of American Roulette 3D, perfect for players who want to complete against other gaming enthusiasts who play at your online casino. Players can see who they are playing against in the lower-left corner of the screen. Everyone will see the same number when the lucky one is picked.

In order to bring a little diversity to your online casino, you can choose the American Roulette TV 3D, which is similar to the classic American roulette. The roulette wheel is displayed on a large TV screen after the bets are placed. The multiplayer variant of this game can be played by several users at once, just like the American Roulette 3D, classic version of the game.

The Mini Roulette 12 game created by our casino 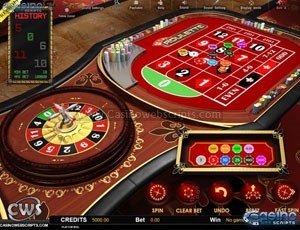 software developers is a simplified version of the traditional roulette game, which uses only 13 number pockets: numbers from 1 to 12 and a 0.

Due to this fact, players who find the standard roulette game complicated due to the large number of possible bets, can get comparable odds while having fewer possibilities with the Mini Roulette.

Like so, in the long run, the bets will be much more likely to hit than in European and American roulette.

Our Mini Roulette game has been designed with a glamorous background, which reminds us of the most luxurious casinos around the world. With a wooden table and interesting decorative elements, a nicely-designed background and the possibility to change certain features of the game, Mini Roulette will appeal to any player who enjoys a classy casino game.

A nicely-designed roulette game is a great option for operators looking to start an online casino, as this game remains a classic which will be enjoyed by us and the generations to come. For more information on how to purchase our roulette games and test them with a live demo, check out our casino games page.

*Enter sum of: 7+1
*I consent to having this website store my submitted information for the purpose of contacting me back with an answer to my enquiry. Type YES in the box below.
Subscribe to newsletter? Type YES in the box below to subscribe or leave empty to avoid subscribing.
What were you searching for, when you found us? Keyword(search engine phrase):