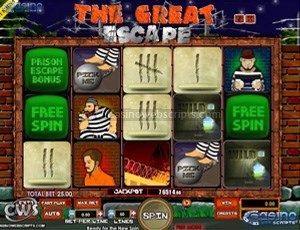 Our team at CasinoWebScripts reveals our latest premium slot game for operators who want to buy online slot games. “The Great Escape” is a 5-reel Flash game which presents the story of a convict who needs to escape the prison as soon as possible. The symbols of this game include numbers scratched on the wall and fierce villains.
“The Great Escape” slot game is filled with extra game features. Players will have the chance to discover an expanding wild, freespins, a really interesting bonus mode and many more animations.
When it comes to buying online slot games, the trend for 2015 is all about games which present a story. In order to keep the user engaged while playing, we have created a bonus feature that, once activated, gives the player the chance to interact a lot more with the characters.

The bonus mode is one of the highlights of “The Great Escape”. The user will have to climb on different ropes in order to help the main character of the game escape from the dark prison. The player can either win or lose during this bonus, due to the fact that if he chooses the wrong ropes, he will fall off the prison wall with the winnings collected up to that point. On the other hand, if the user manages to choose the right ropes and climb up the wall to the point where he can escape, all winnings will be collected.

Entrepreneurs who want to buy online slot games might also like to know that “The Great Escape” also comes with an expanding Wild, representing the prison doors that open when the convict escapes.

When the freespins feature is activated, all winnings will be multiplied depending on the number of freespins symbols that appeared on the screen.

When this feature is activated, players will reveal prizes while clicking on the indicated objects (a ball and chain). Only the selected symbol will reward you with its reward. The other symbols will reveal their potential rewards too so that you may see what you could've won.

When this game features is activated, a colorful animation pops up on the screen to announce the user that he has won a big prize, along with a sound of 5 bullets being fired.

The most rewardful feature of the game which can be triggered randomly by any of the users, will make the entire screen get full of scatters.

“The Great Escape” is suitable for desktop online gaming sites, and especially for online casinos, Bitcoin gaming sites and social gaming, due to the fact that it is vividly animated and the player gets the chance to fully interact with the game.

Operators who want to buy this amazing online slot game can check all the features of “The Great Escape” in our dedicated page here.

*Enter sum of: 4+10
*I consent to having this website store my submitted information for the purpose of contacting me back with an answer to my enquiry. Type YES in the box below.
Subscribe to newsletter? Type YES in the box below to subscribe or leave empty to avoid subscribing.
What were you searching for, when you found us? Keyword(search engine phrase):