Video poker is one of the most popular casino games that we can find in land-based casinos, gaming establishments and even betting shops. It’s no secret that nowadays we can find hundreds of video poker game variants at online casinos, with different themes and a wide variety of playing modes.

Operators who are looking to find out how to start an online casino might want to include at least one video poker game in their games collection, due to the fact that it is usually requested by all types of casino players – from beginners to experts.

We have gathered a few games from our collection and explained the differences between them, so that you can decide more easily when it comes to opening your own online casino.

This version of video poker is the one that we all know – the rules are easy to follow, and the design of the game reminds us of the classic video poker games that we can find in casinos all around the world.

The classic game involves dealing five cards, which players can hold or discard, in the attempt of forming winning combinations. The Jacks or Better game is preferred by players thanks to its good payoff, with a return of 99.54%. The lowest-paying hand is the 'jacks or better' pair, followed by several combinations, which include two pairs, three of a kind, straight, flush, full house, four of a kind, straight flush, and, the most valuable one, royal flush.

This kind of video poker does not offer any jokers, which can be found in other variants of this game. Even so, the interesting part about Jacks or Better is that players can choose to gamble their winnings – after a winning formation comes up on the screen, pressing the ‘double’ button will allow players to double their winnings, if the card chosen by them is higher than the one already revealed on the screen.

As the name suggests, during this game, players need to form a ‘kings or better’ pair. This is the lowest-paying hand, which means that you can form solely one single pair besides kings – the ace pair.

This is why some players prefer the Jacks or Better version of this type of video poker, as they can get winning pairs with a ranking of jacks, queens, kings and aces, rather than just kings or aces in Kings or Better video poker. 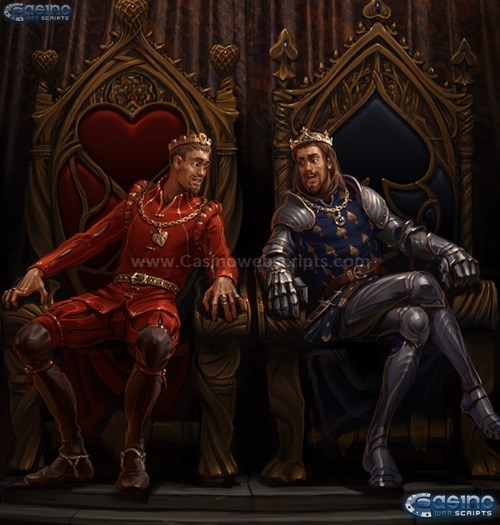 Operators who want to find out how to start an online casino should know that the payoffs are identical to the ones in Jacks or Better, and the calculated return to player is 97.19%.

In Kings or Better, players will also discover the COLLECT and DOUBLE buttons after a winning hand. Like so, players can double their winnings by betting that a single card chosen from a stack of four will be higher than the card already dealt on the screen.

This type of video poker is a favorite among casino players, due to the fact that it adds something extra to the standard 52-card deck – a joker, which substitutes any card, thus helping the player get a better paying hand.

In this game, a pair or jacks or a pair of queens will not offer any winnings, similar to the Kings or Better game. Therefore, the minimum qualifying hand in Queen of Hearts is the ‘kings or better’ pair.

The return to player is 98.09%, but the advantage of having a joker increases the popularity of this game among players.

Operators who want to know how to start an online casino should also consider adding Lucky Deuces Wild to their collection. In this game, the four deuces can replace any card on the table, so that players can get closer to getting a winning hand. Like so, the deuces act as a substitute for any missing card.

The fact that the four deuces are counted as wild cards affects the payout schedule. As with the other video poker variants, during this game, the player receives five cards face up, and, for each card, he must decide whether to hold or switch that card.

This game has a slighter difference interpretation than the other video poker variants. For example, if the player receives one ace (A) and four deuces (2 2 2 2), the hand will count as four deuces, not five of a kind, because the ‘four deuces’ hand pays more than the ‘five of a kind’ hand.

Lucky Deuces Wild is one of the more popular forms of video poker, and it is usually preferred by players who are more experienced.

This version of video poker also allows players to take a chance at doubling their winnings by choosing a card which must be higher than the one already revealed on the screen.

Mystical Number is one of CasinoWebScripts’ video poker games designed with a specific theme. Operators who want to start an online casino can choose this game for players who enjoy a video poker game that stands out from the collection thanks to its unique look and engaging gameplay.

Mystical Number has been designed with a magic-inspired theme, which includes a wizard holding a globe in the right part of the screen. The wizard plays an important role during gameplay, as he holds a globe which shows the flexible joker .

The flexible joker feature allows players to choose any card to serve as a joker for the next hand played. The joker can be switched only before the five cards are dealt, before any round of the game, as often as the player wants to.

Having a joker which can be switched at any time has reduced the average return to player to 94.82%. In order to create a balance between the house advantage and player advantage, the lowest paying hand has been set at ‘three of a kind’.

Like so, no simple pairs will represent a winning combination during this game.

Just like in Royal Deuces Wild, the rules of the game are slightly different than the ones of Jacks or Better or other video poker variants. For example, if the player chooses the ‘7’ card as a joker, and he receives a combination of an ace, plus 7 of spades, 7 of hearts, 7 of clubs and 7 of diamonds (A 7 7 7 7), the winning hand will be ‘four jokers’ rather than ‘five of a kind’, due to the fact that ‘four Jokers’ pays better.

*Enter sum of: 4+6
*I consent to having this website store my submitted information for the purpose of contacting me back with an answer to my enquiry. Type YES in the box below.
Subscribe to newsletter? Type YES in the box below to subscribe or leave empty to avoid subscribing.
What were you searching for, when you found us? Keyword(search engine phrase):