The game of poker has been around for quite some time now. It is a popular gambling game played by people across the world. It is commonly played a great deal in both land casinos and on online casinos as well. What exactly is this game, and how did it all begin?
Poker is a casino card game based on dependent events, meaning that each card dealt and kept or discarded affects the outcome of future results. There are quite a few variations that have been popularized throughout the decades, and a few of these are offered in almost any casino across the globe. The game is generally played by a player being dealt a certain number of cards, and performing specific actions in an attempt to obtain the best hand possible. The player typically compares their hand to that of other players and sometimes the dealer, and then the player with the best hand wins the “pot” of money that has been bet. Poker is most commonly played at a table with physical cards and other players competing for money. However, virtual poker machines can often be found around casino floors as well.

How it All Began

Many historians argue about the roots of Poker, and in which country it started to come together. The earliest known games of poker as it is played today were said to take place in gambling saloons in the USA in the early 1800’s. The game begin with a deck of only 20 cards to play with. More cards were gradually added to the deck to accommodate for more players, eventually leading up to today’s standard 52 cards by the mid 1800’s. “Draw” and “Stud” poker were the most commonly played variations of the game throughout the nineteenth century. There is no confirmed notion as to who actually invented the game, as it is believed to have been around in different forms for centuries before it hit industrialized countries. However, an American ambassador to Britain, General Schenck, is commonly credited for introducing the game into mainstream society in 1872.
As the game aged more rules and hands were added. For example, the “straight” (a run of 5 cards in order) was not officially added to the game until the brink of the twentieth century. An early game of Texas Hold ‘Em, a widely popular poker variation, was said to take place in 1926.
Betting on the game has typically always been a part of the enjoyment. The actual amount of money bet, and the timing of the bet placed has varied over the years.
The game continued to be modernized and to grow in popularity throughout the twentieth century. By the 1970’s the World Series of Poker had formed and was spreading by the minute.
As the game has origins from a variety of games across the globe, the spread of modern poker was extremely quick. Today, the game can be seen in almost any casino, both land and online. The game is also commonly played at bars and at home with friends.

The Spread of a Legend

The growth of the modern game of poker across the world can be attributed to a number of events. First and foremost, the game has been around in countless countries for centuries, it has just been seen with different rules and variations. The game has also spread very quickly because of the addition of a few of its variants to most casinos across the globe. The addition of media presence and the World Poker Series have added to the hype and popularity of the game.
The spread of poker begin by groups of men playing together at home, on breaks from work, and commonly during wars. It moved on to a common saloon game played by drinking men at night. This then led to it being added to one of the many casino table games across the globe. Virtual and online poker helped the game to march on and to acquire new players. Today, the game is played by millions of people, both men and women, of any age and background. 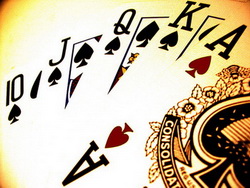 The rules that are laid out for poker depend mainly on the variation that is being played. The classic five-card game begins with a deck of 52 cards, containing the four suits of hearts, diamonds, spades, and clubs. In this variation, players are first dealt a hand of five cards, the contents of which they keep to themselves. The players bet on how good of a hand they think they have at that point in the game. They can then discard up to three of their cards, and are dealt the same number of new cards as they have thrown down. Another round of betting occurs after this. Players may fold their cards, and end the round for themselves if they do not believe that they can win, or bluff about winning, with the hand that they have. Players still in the game can raise the bet if they so desire, and the other players must “call” the bet by placing the same amount in if they want to stay in the game. When betting is completed, everyone will reveal their hands. The person with the best poker hand will win the “pot” of money that everyone has placed their bets into.

There are a variety of other poker variations that are commonly played in casinos. The three main categories that these variants can be placed into are: Draw Poker, Stud Poker, and Community Card Poker.
The first category, Draw Poker, has been explained above with its most common example, the Five Card Draw.
The second category, Stud Poker, deals with cards that have been dealt to players both face up and face down. In the most common form of this variation, Seven Card Stud, players are originally dealt three cards, two are facing down and one is facing up for the entire table to see. The players will then bet on how good they think their hand will turn out, with the player with the lowest ranking card starting first. A second face up card will then be dealt to each player, followed by another round of betting beginning with the player who holds the highest ranking hand at that point in the game. Two more rounds continue in this manner with the players being dealt a face up card and then betting on their perceived hand. The fifth dealt card is then placed face down. The final round of the game is known as a “showdown”, it is here where the players view all of their cards, including those that have been face down, and form the best possible five-card hand. The player with the highest ranking five-card hand will win the round and the pot of money collected from the bets that have been placed. 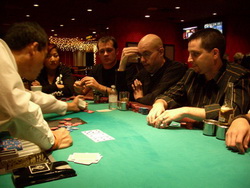 The third category of poker variations is known as the Five Card Draw, the most popular game in this category is Texas Hold ‘Em. This game begins with each player being dealt two face down cards, this is where only the player can see the cards that have been dealt. The players place an entry amount of money to begin the game, this is called a “blind”. This is followed by a round of betting. The dealer will then deal out three community cards, known as the “flop”. The three cards are to be shared by all of the players and the goal is to try to make the best hand possible out of the flop cards and the player’s individual hand. The players will then continue with a round of betting. The game continues with a fourth community card dealt, followed by a round of betting, and then a fifth with yet another betting round. After the final round of betting, the players will reveal their hand and the one that is able to put together the highest ranking five-card hand will win the game.

When playing any variation of poker, the goal for the players is to form the highest ranking poker hand. Described below are the ten most common hands in any game of poker, they are ranked in order from lowest to highest.

The game of poker has grown immensely in popularity over the past few decades. The modern day game variations have spread across the world quickly and with extreme force. It is common to find both table games and virtual poker in every land casino, and almost every online casino offers some variation of the game as well. Poker is a fun and exciting way to gamble and people from all different backgrounds can come together to play the game.

CasinoWebScripts is proud to announce that this year we will be launching a competitive online poker platform, secure and with many innovative features, like table color picker tool, or the possibility to show your cards face down and reveal them only by clicking them ( like in a real environment ).

*Enter sum of: 0+3
*I consent to having this website store my submitted information for the purpose of contacting me back with an answer to my enquiry. Type YES in the box below.
Subscribe to newsletter? Type YES in the box below to subscribe or leave empty to avoid subscribing.
What were you searching for, when you found us? Keyword(search engine phrase):