On December 1, we have released three new casino games, including two html5 casino games, suitable for both mobile and desktop devices, and a Flash casino game developed especially for desktop devices. Due to the fact that video poker games are highly requested, we have developed two video poker mobile games, as an addition to our already-existing collection of Flash video poker. Royal Flush Party and Jacks or Better are our latest titles for mobile devices. We have also created a more original game, Poker Dice Wild West, in order to invite operators to add a little diversity to their online casino businesses. 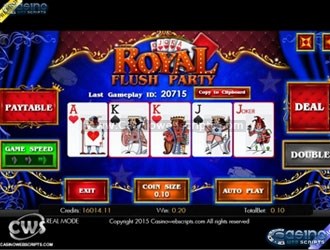 ino game compatible with all mobile devices and desktop computers, which can be played directly from any web or mobile browser. We have developed this game with a low file size of only 4mb, in order to allow smooth game play and short loading time. This game is a classic video poker, where the computer deals a five card hand, and players can switch any of the cards in order to create a winning formation. There is also a Joker card that acts as a substitute for any card. Royal Flush Party has been designed with a glamorous background, with blue and wine-red colors.

Jacks or Better is one of the 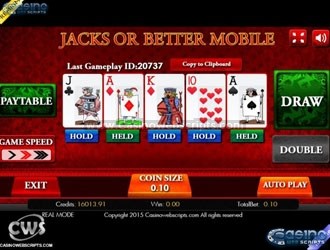 classic versions of video poker, highly requested by gaming enthusiasts from all around the world. This HTML5 casino game has also been developed for both mobile and desktop devices, with a low file size of 4mb, significantly smaller than the usual games which can reach 9mb. This game is fit for both newbies and experts, with simple rules and fast game play. The system generates five cards, and players need to choose which ones they want to hold, in order to get the best chances at a winning formation. The smallest winning pair is the pair of Jacks, followed by the pairs of Queen, King or Ace, fact which gives this game its name, “Jacks or Better”. Players can also try to double their winnings using the Double button. 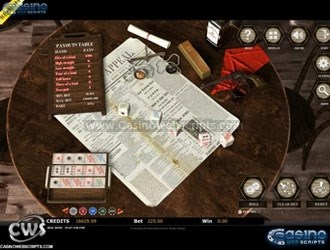 Poker Dice Wild West is a game designed for desktop devices, which makes it perfect for players who are looking to enjoy it on their computers or laptops, or even in a computer internet café. This game, derived from the popular poker card game, has been designed with an original approach and interesting graphics. The action takes place on a table filled with all the items that a real cowboy would carry with him, including a knife, a pistol and a gold bar, the dice being rolled on a newspaper which announces a new gold rush.

*Enter sum of: 0+5
*I consent to having this website store my submitted information for the purpose of contacting me back with an answer to my enquiry. Type YES in the box below.
Subscribe to newsletter? Type YES in the box below to subscribe or leave empty to avoid subscribing.
What were you searching for, when you found us? Keyword(search engine phrase):