Although it’s uncertain who created the concept of gambling and playing games for real money, it is believed that the industry began in Europe. We may not know which country was the first to encourage gambling, but we can say for sure that the industry has spread extremely fast over the past few years, and that millions of people are enjoying it to its full potential. Important games like poker, baccarat, roulette and bingo, were initiated on European continent. This is important actually, because it means that Europeans have enjoyed gambling for more than half a millennia so far, and there are no signs that the people will stop any time soon. 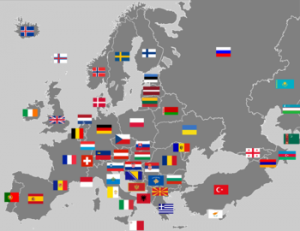 Surely, there have been periods when gaming was strictly forbidden in Europe, but things have changed and now anyone has the chance to try it. Three hundred years ago, when the pleasure of gambling was reserved only for royal families and wealthy individuals, ordinary people were not permitted to try their luck, not even with the simplest games. However, as our society evolved and developed, things have greatly changed and gamble is perfectly legal in Europe for individuals over 18. Also, the internet completely revolutionized the concept and when online casinos appeared, these games have become overly popular due to the increased level of accessibility.

Furthermore, before the formation of the European Union, all countries were able to decide the gambling legislation on their own, so they were able to prohibit or encourage these types of games. That’s why there were European countries that chose to forbid gambling on their territory, while others decided to allow gambling and derive substantial taxes from licensed casinos to bring huge gains to government officials.

Nevertheless, the Berlin Wall fell and a few years later the European Union was created. It came with its own set of rules that were decided by all partnering countries. Likewise, the Union promotes a fair trade policy, which implies that all nations are encouraged to do business with each other of any kind. According to the Free Trade agreement, each country can interdict a certain business practice on its territory if this does not respect its moral or ethical code. However, this is not allowed if it denies the access of foreign companies on the market, and it is aimed to protect the local economy and maintain the monopole for homegrown businesses. Therefore, even under the most authoritarian interpretation, gambling, both land-based casinos and online, is legal in the European Union and as a matter of fact, it is a flourishing market sector.

Moreover, in spite of the Free Terms agreement, there still are several member states that have opted to ratify the legislation and ban online gambling. In most cases, gambling is not against the law, but in some states like Germany and France, the laws are extremely interpretable, and the matter of protection of the state has been brought to the table.

The ideal example is Germany, which in January 2008 introduced a law that prohibited all types of online gambling, claiming that this way its citizens are being protected, and that they do not run the risk of being preyed by deceitful online casino operators. Still, state-run lotteries have not been banned from the internet, and consequently, this practice has been regarded in several German regions as a direct result of the law. Also, anti-online gambling laws that have been instituted in Germany, as well as in France, are now the subject of a main trial in front of the European Commission. It has been said that prohibitive laws do not respect the European Union’s Constitution and that they represent a double standard. Although the European Commission is allowed to sue any of the member countries in order to force compliance, it usually prefers to approach issues of this kind in a more diplomatic manner. Consequently, France has now agreed to modify the legislation in relation with online gambling procedures and open their market to the licensed foreign competition. It is hoped that it will be taken as an example by other recalcitrant countries from the European Union, and that they will follow the lawsuit.

Currently, the European Union comprises of twenty seven states that are divided into three different groups, according to the issue of gambling. The first group consists of thirteen members and all countries that are part of it have liberalized online gambling. The second group has only seven members that have agreed to permit online gambling for the national dominant, whereas the third group has seven more members that banned it completely.

Furthermore, each group has adopted a specific strategy according to a series of reasons. For example, the countries that are part of the second group claim that only national monopolies are permitted online gambling because they can produce a higher tax income through this practice. Likewise, a third group supports its decision saying that they have forbidden online gambling to protect consumers, and that this decision is in their population’s best interest.

Also, since each one of the three groups has a different approach with regard to online gambling, the market has been divided and we can no longer talk about a single, liberalized market. Therefore, it is the duty of the European Commission to clarify this matter and persuade the countries to adopt a most compliant attitude. Nevertheless, so far it has been evident that the online gambling market does not resemble with any other market out there, and this is why there are countries like those included in the third group that see it as dangerous and offensive. Similarly, the countries in the second category claim that by opening this market sector only to biggest companies, they can impose huge tax revenues, and they also can monitor attentively all online-gambling activities.

While a possible reason for members of the second category can be to generate greater tax revenues, there could be other possible reasons as well. One such motive could be an improved ability to monitor online-gambling activities through their respective national monopolies. However, the main goal of the European Union is to keep all its members united, at least for these delicate matters, and this is why it would be advisable for these countries to debate the issues, and consider changing the regulations to avoid being called to the European Court of Justice.

*Enter sum of: 4+6
*I consent to having this website store my submitted information for the purpose of contacting me back with an answer to my enquiry. Type YES in the box below.
Subscribe to newsletter? Type YES in the box below to subscribe or leave empty to avoid subscribing.
What were you searching for, when you found us? Keyword(search engine phrase):