Pirate-themed casino games have proved to be some of the most demanded applications on the online gambling scene. Operators who are looking to start an online casino business should consider adding at least one pirate-themed game to their portfolio. The number of pirate-themed games is increasing rapidly, but casino slots and casino arcade games seem to be preferred by the online community, due to the fact that the winning factor is involved during gameplay.

In this article, we are going to review some of the most requested pirate-themed casino games by Casino Web Scripts, and we will also provide a list will all the pirate games developed by the gaming development company. 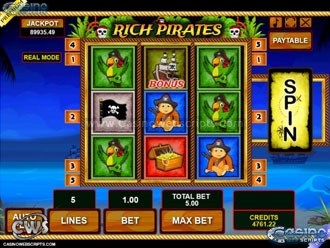 With the increasing demand of mobile casino games, Casino Web Scripts decided to develop their first pirate-themed 3 reels mobile slot game. The game is compatible with both desktop and mobile devices, and is developed in HTML5 technology. Rich Pirates slot comes with nicely-designed symbols, vivid colors and an interesting range of additional features.

During the game, players will discover valuable symbols, such as gold coins, treasure chests, pirate flags, and the mighty companions of the captain, the monkey and the parrot. Even so, the highest payouts are delivered by the fierce captain himself, which is the most valuable symbol. One of the most precious symbols is the majestic pirate ship. When three pirate ships appear on the screen, players will enter BONUS mode, where they will get to pick the ships that the pirates will rob. 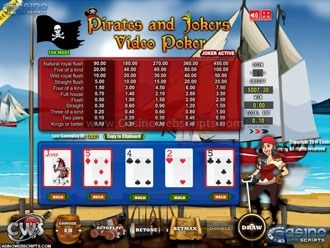 ’t like to play video poker in the company of a charming lady pirate who wants to trade her riches for a good game of poker? Operators who start an online casino business might want to take a look at this original version of the classic video poker game.

With a pirate-themed background and sound effects that will make players feel like they’re on a real pirate ship, this game is perfect for those who enjoy taking part in a real quest for the riches.

The cards that are dealt in this game have been designed in a classic manner, fit for the pirate theme. Just like in the traditional video poker games, players will have to press DEAL and five cards will be revealed. After choosing several cards, the others will be replaced by new cards, and combined they can reveal a winning formation.  If players decide to DOUBLE UP, only one card will be revealed, and a higher card of the four remaining ones must be chosen in order for players to win.

Pirates of the Seven Reels 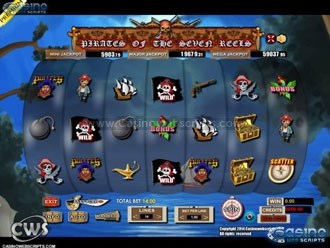 Operators who are looking to start an online casino business will surely be delighted to discover this 7-reel slot that offers a wide range of features. The first thing that you get to notice about this pirate slot is the animated symbols that illustrate the reckless pirates, the dead man’s skull, the always-present parrot and some gnarly guns.

When you press the spin button, which comes in the form of a compass, the adventure begins. Watch for the treasure chest, as it is the most valuable symbol of them all. An expanding WILD in the form of the pirate ship will reveal itself, and 4 or more SCATTER symbols will offer free spins to those who encounter them along the way.

Look out for the parrot symbol, as 4 parrots will take you to BONUS mode, where you will gain access to the pirate’s secret treasure map. Players will have to choose a location on the map and reveal the winnings. A progressive JACKPOT is triggered randomly, and scatters will appear on all reels.

Pirates of the Seven Reels is full of surprises, and it has proved to be one of the most appreciated games by operators who start an online casino business with Casino Web Scripts.

*Enter sum of: 1+9
*I consent to having this website store my submitted information for the purpose of contacting me back with an answer to my enquiry. Type YES in the box below.
Subscribe to newsletter? Type YES in the box below to subscribe or leave empty to avoid subscribing.
What were you searching for, when you found us? Keyword(search engine phrase):