News Blog Gambling in the USA

Gambling in the USA

Gambling in the USA is legally restricted in most states. Despite this fact, the participation and availability of gambling is continuously increasing in this country. An example to support this statement is the 2007 gross profit generated by gambling activities: $92.27 billion. Moreover, in 2006, commercial casinos provided $5.2 billion local and state tax revenues and 354,000 jobs. There are numerous gambling critics in the United States claiming that this activity leads to higher crime rates, compulsive gambling and increased political corruption. Despite all these problems, gambling in the US is a flourishing activity that’s practiced all over the country in huge and state of the art casinos.

Gambling revenues in the United States come from various games. Thus, card rooms bring about $1.18 billion, lotteries sum up $24.78 billion, Pari-mutuel Wagering offers $3.50 billion and commercial casinos make profits of more than $34.41 billion. There is also Legal Bookmaking with $168.8 million, Indian casinos with $26.02 billion and the charitable bingo and games with $2.22 billion. 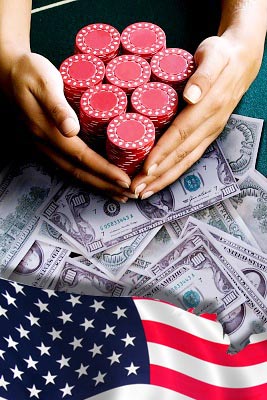 The gambling history in the United States is very rich. It has started with the first settlers and has changed and evolved extremely rapidly. Throughout the years, there have been various restrictions and bans in gambling, but none of them managed to make the casinos disappear. The thriving period for the US gambling began in 1931, after the famous stock market crash. 1931 was the year when gambling and casinos became legal in Nevada, a state that was about to become famous for its magnificent casinos. Gambling was legalized so as to make the state more powerful and rich. Slowly, Las Vegas grew to be an attractive place for investors and by the 1950s it was home to various illegal gambling empires. Things have changed and nowadays, most casinos in Las Vegas are legal. Moreover, the city is now the heart of the US gaming industry. Most of the city’s economy is based on the profits brought by the casinos and resorts nearby. There are 2 main gambling areas in Las Vegas: Downtown and Las Vegas Strip.

Another important gambling center in the United States is Atlantic City. Gambling in this area was legalized in 1977 and it immediately developed. Now, Atlantic City is a major tourist destination and a significant gaming zone. Furthermore, in 1979, the United States has seen the primary reservation - based commercial gambling opened by the Seminole tribe. This type of gambling became a trend in the years to follow. Other regions in the country started legalizing pari-mutuel betting and lotteries. In the 90s, a couple of states, including Illinois, legalized the riverboat casinos. Slowly, the Internet came ground and it managed to beat land casinos. Now, internet gambling is the new trend and it seems that it cannot be outrivaled by anything else.

In the United States the government has legalized gambling so as to raise more money for national and community services. By doing so, they avoided tax raises. There are many types of gambling that are legal right now and they are practiced in many forms, from international poker tournaments to basement bingo games. Currently, the American Gaming Association features 7 categories of gambling:

The most popular gambling games in the USA are bingo, slots, craps, video poker, baccarat, Texas holdem, blackjack and roulette. The states that concentrate most on casinos are California, Florida, Montana, Nevada, Oklahoma and Washington.

A couple of years ago, wealthy Americans took pride in going into Las Vegas or Atlantic City casinos and spend all their money over there. Lately, it seems that land casinos have become mainly tourist attractions rather than being places where people invest money to have fun. The internet has taken over the gambling industry even in a country with so many brick and mortar casinos. More and more individuals prefer to go online, play games and win money from the comfort of their home. Playing online is completely legal in the United States, so there is no reason why people should not do this. However, there are numerous online casinos out there with land headquarters in offshore places. As a result, most of them are not available for the American people.

This will not be a problem any longer as more and more U.S. states are looking for methods to offer online gaming to their citizens. Plus, through this decision, these states are trying to produce tax revenues. One of these states is Vermont. Peter Shumlin, the State Governor, has recently talked with the Lottery Commission in Vermont to find a way to generate money via the gambling industry. In the end, the money will be redirected to the education fund of the state. Not long ago, the education fund received $20 million from lottery revenues. Shumlin also said that the future resides on internet lottery. This doesn’t mean that the lottery won’t be selling tickets anymore, because the downtown stores make profit out of those tickets. Still, the continuously developing technology and popularity of the Internet has forced officials to take into consideration the possibility of increasing revenues via online gambling. Finally, he mentioned that numerous Vermonters have problems with gambling and he thinks that some sort of online gambling could be a solution for those individuals.

Even the Justice Department in the US has announced that the federal Wire Act will be reinterpreted so as to make online gambling easier to legalize. Now, the act says that the only outlaw activity is wagering on sports. Wagering on non-sports gambling across state borders or within states is no longer illegal. This law is also beneficial for online casinos that are now allowed to operate on the US territory. Since online poker has brought $6 billion per year in the United States, there is no wonder that the authorities want to use it to pull out new revenue. Thus, the taxes coming from legalized online casinos will decrease or even prevent the cuts to public employee pension, entitlements and bureaucracies systems. Therefore, a new gambling era is emerging in the United States and this time all the fun will happen online.

*Enter sum of: 0+5
*I consent to having this website store my submitted information for the purpose of contacting me back with an answer to my enquiry. Type YES in the box below.
Subscribe to newsletter? Type YES in the box below to subscribe or leave empty to avoid subscribing.
What were you searching for, when you found us? Keyword(search engine phrase):