Winter has come into full force, and even though Christmas and New Year’s Eve celebrations have already passed in different parts around the world, people are always eager to enjoy playing interesting games on their computers or mobile devices during their spare time.

Winter-themed games are a great choice for operators looking to start a turnkey casino business, taking into consideration that they can bring us closer to certain elements that we enjoy about winter. CasinoWebScripts has created a collection of online casino games with themes such as Christmas or the North Pole, which will be enjoyed by any player who wants to get into the winter mood.

Santa Spins is a 3-reel slot game which has been developed with HTML5 technology, meaning that it can be played on both mobile and desktop devices.

The theme of this game refers to the moment when Santa Claus delivers the gifts, and players are invited to help Santa during his journey, and be rewarded accordingly.

This game has all the symbols that remind us of Christmas, including a funny reindeer, a beautiful Christmas tree, a gingerbread man, a cheery snowman, Santa’s bag full of presents, and, of course, Santa himself. One of the most interesting features of this game is the bonus round, which is activated when three bonus reindeers appear on the reels.

During bonus, players will help Santa deliver the gifts by directing him to the houses that should receive the nicest gifts. Santa Spins also comes with a progressive jackpot feature, which can be won randomly by spinning the reels, when scatter symbols appeal on all reel stops.

Operators looking to start a turnkey casino business can discover all the features of this game in our demo version, where you can manually select the features you want to test. 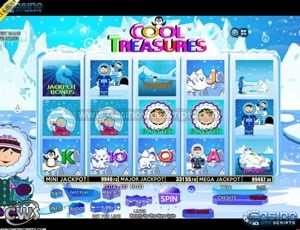 Cool Treasures 5-reel slot is one of the most nicely-designed winter-themed games that you can find. With a cheerful background music, a North Pole theme and a wide range of additional features, this game will be a delight for any gaming enthusiast. Among Cool Treasure’s symbols we can find the extra cute penguins, seals and silver foxes, the lazy polar bear and the happy Eskimos. The background music and sounds of this game are meant to induce a state of happiness, and the nicely-designed background of the game, including the game’s characters, will bring a smile to the face of anyone who plays it.

This game is packed with additional features which make the gaming experience exciting and compelling. The expanding wild symbol features a funny Eskimo waving at us from his igloo. At least three scatter Eskimo girl symbols will trigger freespins mode, during which the reels will stop spinning, and instead they will break into ice cubes and reveal the symbols. The bonus mode is triggered when at least three polar bear symbols stop on the reels.

During bonus, a penguin on an iceberg appears on the screen, with several other icebergs on which gifts were placed. The player must choose which gifts the penguin should open. There is also a jackpot bonus round, which includes a fortune reel that can bring prizes such as mini, major or mega jackpot, additional free spins or multipliers. A gamble mode and a progressive jackpot win are also available.

If you want to open a turnkey casino business and include this game in your collection, you can also test all of its features manually in our demo version and easily discover all it has to offer, without having to wait for the right symbols to come up on the reels. 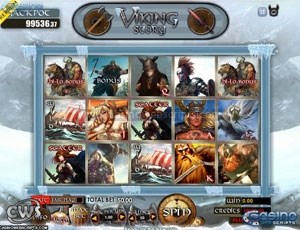 Step into the world of the legendary Vikings with this action-packed game. Viking Story is a 5-reel slot game which presents the story of the mighty Vikings, with all of their treasures hidden among the icy coasts. The symbols of this game have been designed in a story-like manner, with brave warriors and Viking ships that sail the icy waters. The Viking ship serves as the WILD symbol of the game, which expands when triggered, while the red-haired princess acts as a scatter symbol which triggers the free spins.

More than that, operators looking to start a turnkey casino business will discover that Viking Story offers two bonus rounds. One of the bonuses reveals a set of Viking shields hidden near an ice cave. Players must break up to 5 shields with an axe and reveal their winnings.

When at least three Viking rider bonus symbols appear on the reels, the other bonus round is activated. During this bonus round, a HILO mini game is revealed, where a Viking rider must pass through a cave to collect the treasure. The player needs to pass three levels in order to collect the biggest treasure, by guessing if the next number which appears on the cave walls is higher or lower than the last one. At the end of each level, a separate treasure is revealed. Like so, the rider can choose to pass to the next level or collect his winnings. If the player guesses incorrectly two times, the bonus ends.

Viking Story is a game that will keep players alert while offering an interesting set of unique features. This game can also be tested with our live demo. 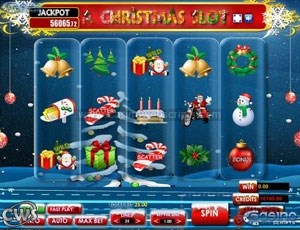 A Christmas Slot is a 5-reel video slot game which will be a favorite among all players who enjoy Christmas celebrations. Whether it is winter or any other season, you will get to feel the Christmas cheer anytime. This game has been designed with graphics that remind us of all the traditional Christmas elements, including Christmas trees, mistletoe, candy, decorations and even Santa on a motorcycle. The background music is a classic Christmas carol, and the decorated tree placed in a garden covered in snow complete the Christmas look of this game.

When it comes to the extra features of this game, we can say that it has it all: free spins, an expanding wild, an extra nice bonus round and more. The expanding wild symbol shows a toy Santa with his presents, while the bonus round allows players to enter a room where they can pick their own presents. Operators looking to open a turnkey casino business can test this game with our demo, and use it for any online gaming business on desktop devices.

Scratch Upon a Christmas 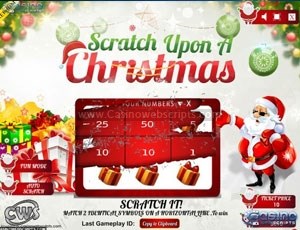 Our collection of winter-themed games wouldn’t have been complete without a Christmas scratch card.

One of the easiest games out there, scratch cards are perfect for players who are new to online gaming, since no skills are required during gameplay. Just like any lottery-style game, players simply need to scratch the card and see if they matched the right numbers.

*Enter sum of: 8+4
*I consent to having this website store my submitted information for the purpose of contacting me back with an answer to my enquiry. Type YES in the box below.
Subscribe to newsletter? Type YES in the box below to subscribe or leave empty to avoid subscribing.
What were you searching for, when you found us? Keyword(search engine phrase):